Posted on August 14, 2013 by Saul in Uncategorized

Trip Report:  Sunday August 11, 2013.
After a SUBW club walk I was going to do, exploring passes on the west side of Mt Solitary was moved at the last minute to a different day, I ended up doing this instead.

My alarm went off at an ambitiously early 5am. After only one extra 9 -minute “snooze” I was up and about, ready for a big day of bushwalking.

The problem was that, even as a woke I still had no idea where I was going to go. I was keen to explore the Grose Valley and to follow the river from Victoria Falls as far downstream as I could in the day and a half I had. Maybe exit at the Faulconbridge Ridge. But I didn’t have either of the topo maps for the Grose River. And it was a Sunday so shops were either shut or late opening. The Grose would have to wait for another day.

After two whle hours of pfaffing about I finally settled on doing a circuit of the Jamison Valley: Golden Stairs – Landslide – Leura Forest – Kedumba River – Mt Solitary – Golden Stairs. I’d done that walk before, going the opposite anti-clockwise direction. That was a few years ago when I was less fit. At the time it had taken me a very long time, maybe 15 hours. I’d started early and gotten back to my car about 11pm. Finding the route through the landslide area was quite tricky in the dark too. Going the other way around would avoid that problem. It would also let me make good time along the easy track to Leura Forest and then the fire trail from there to the Kedumba River turn off.

I was up at the Golden Stairs car park ready to set off at 9:50. The carpark was pretty full and several parties and another solo walker were milling about also just leaving for their day’s walking. I passed them all on the way down the steps, turned left at the bottom and was soon passing the Giant Lanslide. Beyond the landslide I heard the clamour of all the visitors to the Scenic Railway. It was a fine, clear and warm morning and lots of people were taking advantage of the great weather to enjoy some time under the northern escarpment beneath Katoomba. Even with all the tourist infrastructure, I think it is really lovely downm there. There are thousands of other spots nearby of similar beauty and tranquility for bushwalkers offended by the dreaded tourists. Those sensitive walkers just need to bother walking a little bit further – no great problem for such “hardcore” types.

One thing that a certain type of bushwalker does, that really shits me, is destroy signs and cairns. They say that anyone who relies on such aids for navigation has no business being in the bush. What bullshit! What wankers these people are. I can find my way around perfectly well with map and compass, but like anyone have been greatful for a well-placed cairn on an obscure pass. What if destroying a cairn or obliterating a sign led to someone getting lost, or worse? How smart would that make the bushwalking police?

While I’m ranting, another thing that puzzles me is the bushwalkers’ hierarchy of walking surfaces. This is where the width of the path determines its quality, the smaller the better. Hence walking along a fire trail is not enjoyable. Regardless of the surroundings it is just an unpleasant “fire trail bash”. It is even worse if the trail is paved (a “road bash”). If there must be a track at all it should be single track only and preferably faint. “Tourist” trails are derided as “superhighways”.

And one last thing. Dear bushwalkers and bushwalking writers, the words faint and feint mean quite different things are are not so far as I know interchangeable. Stop calling faint tracks “feint”.

Now back to the walk…

Made fast time through the dreaded “tourist” section of the track around the Scenic Railway, walking at a suitably testosterone-charged pace of around 8km/h. Naturally that surge of energy subsided as the crows thinned. Leura Forest was beautiful, dappled morning sunlight filtering through the trees. An hour and a half into the walk, at the bottom of the stairs going up to Prince Henry Cliff Walk, saw my second last other people as I passed the old wooden “Federal Pass” sign 1:24mins into the walk. This is by the lower Linda Ck falls. The path continues straight on, slightly hidden behind the sign. The way continues straight on for a little way before turning right down the hill when you come to some old concrete sewerage remnants. The trail goes down the hill to the start of a clear fire trail through the old water treatment plant clearing.

I remember seeing the water treatment plant from up on the escarpment as a child. There is little sign of it now other than a clearing and a few small concrete remnants. The *gasp* fire trail bash through the valley was the service road for the facility. All the steepest sections are paved, as are the two fords over Leura Falls Ck and Jamison Ck.

It is a really nice walk through the valley, mostly downhill in the direction I was walking, but undulating. I jogged down most of the hills trying to bank some time for later in the walk.I stopped for a pee at one point just off the side of the trail, and of course that caused another walker to instantly appear walking up the hill towards me. I finished before it got too awkward and we wished each other a good morning. She was the last other person I saw all day.

I kept my feet dry on the two creek crossings rock hopping off to the side of each ford. After rain it would be wet feet or “boots off”. The sign at Leura Falls Ck warns you not to drink the water. This creek flows into the Kedumba River, from which I’ve drunk in the past without problems. 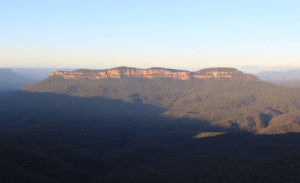 Mount Solitary. The Col on the left, Korrowal on the right.

From the Jamison Ck crossing my pace slowed as the track turned steeply uphill until the spot where a narrow single track branches off to the right. This track drops first right back down to river level for an often “boots off” or “wet feet” crossing of the Kedumba River. Next it climbs, and climbs, ever more steeply up the imposing western ridge of Mount Solitary. Eventually it reaches the rocky outcrop at The Col, 640 metres above the river. There I paused for breath, though not for the first time on that big climb, and signed the logbook. The view from here is always magnificent, but it isn’t the top and I still had a fair bit of climbing ahead of me before the relatively flat plateau over the top of Solitary. In fact, there isn’t much flat along there, it is very undulating and certainly hard to get any walking (or running) rhythm up as it can be quite a rough track even with a couple of little scrambles along the way. It was about 5pm by the time I left The Col, giving maybe an hour more of light.

I hoped to be down the other side of Mt Solitary before dark, but night closed in just as I reached the top of the steep scrambles down to the Korrowal Knife Edge. Even with my head torch the way was tricky to spot at times. There are so many side tracks off into nothing and to dead ends. Lower down the climb they lead onto the steep slopes above the trackless Cedar Valley before vanishing in a tangle of scrub. It is probably one of these that led hapless English backpacker Jamie Neal nearly to his doom in the valley below. For twelve days he struggled to find a way out, he claimed, before finally stumbling out at Medlow Gap off to the south-west and into the arms of some bushwalkers who helped rescue him.

Cedar Valley is an odd place. It is very close to Katoomba and civilisation, yet is trackless, wild and beautiful. Once in it there is virtually no through way out without trespassing on the water catchment exclusion zone. And yet, if you do as Bear Grylls always suggests (often the opposite of what will save you in the Blue Mountains) and follow the creeks downstream you will come accross a road. If you go uphill, the only way out is up towards Mt Solitary with easy, though very steep, exits north-east to the Korrowal Knife Edge and the Ruined Castle. You could also get out to the south and then west, contouring Solitary that way. But those slopes are steep and very scrubby. After a long, slow slog though tangles of lawyer vine you’d eventually hit the closed service road in the exclusion zone.

Once I was down off the ridge of the Korrowal Knife Edge I made quick time again along the flat and clear track back to the Golden Stairs. It took 23 minutes from the second turnoff to the Ruined Castle back to the foot of the stairs. Just one more hard climb, harder than normal as I was fairly tired by this stage, and I was out. Total time 9 hours, 41 mins. Had a big drink of water, as I’d been running very low for the last hour or so, a quick stretch and then off to Katoomba for some food. Went to a fast food place called something or other Roast. I wouldn’t recommend it.

Home by a reasonable hour. Altogether a superb day’s walking.

View all posts by Saul →
← Penrith to Epping
The most dangerous vehicles: a guide for cyclists and pedestrians →